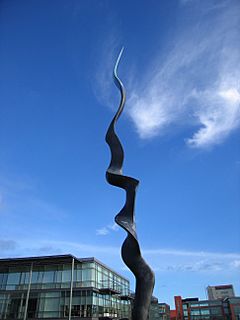 Located just inside the M50 orbital motorway in west Dublin, the development comprises several million square metres of office and retail space, along with an Aspect hotel, a private hospital, and three apartment complexes.

Park West is in the administration of Dublin City Council, and Dublin postal districts Dublin 10 and Dublin 12, chiefly the latter.

Park West is home to Europe's tallest wind and water mobile sculpture, Wave by Angela Conner. It is a 39.3 metre (129 feet) tall sculpture made of polystyrene covered with layers of carbon resin. It is fixed into a 7.6 metre (25 foot) pit filed with 9.5 tonnes of lead.

The campus is accessible by road (primarily the (New) Nangor Road, as well as Killeen Road and Cloverhill), bus (routes 79A and 151) and rail at the Park West and Cherry Orchard railway station. At a moderate distance to the south is the Kylemore stop on the Luas red line.

All content from Kiddle encyclopedia articles (including the article images and facts) can be freely used under Attribution-ShareAlike license, unless stated otherwise. Cite this article:
Park West, Dublin Facts for Kids. Kiddle Encyclopedia.