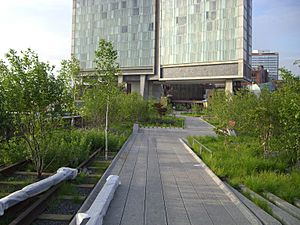 The High Line, an example of a park managed by a conservancy.

A park conservancy is a type of private, non-profit organization in the United States, that can support the maintenance, capital development, and advocacy for parks or park systems. These organizations raise money through a variety of means to care for urban parks, and while there is not a single model for how a park conservancy can or should be developed, they are created to meet the needs of local communities based on their resources and political situations.

Park conservancies developed in relation to what some call a fifth model for parks, namely those that are sustainable in plantings, usage, and funding. This arose in part due to a lack of public funding allocation for parks, along with structure that allowed the members of the community to directly support their own parks. The number of parks conservancies has grown in the past decades as city funding for parks has in many cases declined, playing an increasingly prominent role in urban parks. One particular aspect of them involves their management, which is independent of local municipal elections. They generally take a long-term perspective on parks, and as a result are financially focused on long-term sustainability to meet their management needs. While the Central Park Conservancy is often considered the first of its kind, they remain different than Friends of the Park groups, Business Improvement Districts (BIDs), and most conservancies in California (where conservancies are often names of state agencies).

While New York City has the most conservancies of any American city, conservancy management and care of large and small urban parks can be found across the country. One size or approach to developing or using park conservancies will not be the same everywhere based on size or funding, Some of these include:

All content from Kiddle encyclopedia articles (including the article images and facts) can be freely used under Attribution-ShareAlike license, unless stated otherwise. Cite this article:
Park conservancy Facts for Kids. Kiddle Encyclopedia.