Architect and Confederate veteran William Crawford Smith, who drew up the Parthenon copy 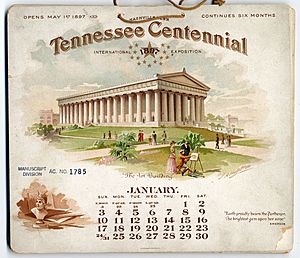 The Parthenon in Centennial Park, in Nashville, Tennessee, is a full-scale replica of the original Parthenon in Athens. It was designed by architect William Crawford Smith and built in 1897 as part of the Tennessee Centennial Exposition.

Today the Parthenon, which functions as an art museum, stands as the centerpiece of Centennial Park, a large public park just west of downtown Nashville. Alan LeQuire's 1990 re-creation of the Athena Parthenos statue in the naos (the east room of the main hall) is the focus of the Parthenon just as it was in ancient Greece. Since the building is complete and its decorations were polychromed (painted in colors) as close to the presumed original as possible, this replica of the original Parthenon in Athens serves as a monument to what is considered the pinnacle of classical architecture. The plaster replicas of the Parthenon Marbles found in the Treasury Room (the west room of the main hall) are direct casts of the original sculptures which adorned the pediments of the Athenian Parthenon, dating back to 438 BC. The surviving originals are housed in the British Museum in London and at the Acropolis Museum in Athens. 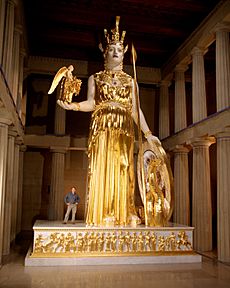 Nashville's nickname, the "Athens of the South", influenced the choice of the building as the centerpiece of the 1897 Centennial Exposition. A number of buildings at the exposition were based on ancient originals. However, the Parthenon was the only one that was an exact reproduction. It was also the only one that was preserved by the city, although the Knights of Pythias Pavilion building was purchased and moved to nearby Franklin, Tennessee.

Major Eugene Castner Lewis was the director of the Tennessee Centennial Exposition and it was at his suggestion that a reproduction of the Parthenon be built in Nashville to serve as the centerpiece of Tennessee's Centennial Celebration. Lewis also served as the chief civil engineer for the Nashville, Chattanooga and St. Louis Railroad. Originally built of plaster, wood, and brick, the Parthenon was not intended to be permanent, but the cost of demolishing the structure combined with its popularity with residents and visitors alike resulted in it being left standing after the Exposition. In 1895 George Julian Zolnay was "employed to make models for the ornamentation" for the building. Within the next 20 years, weather had caused deterioration of the landmark; it was then rebuilt on the same foundations, in concrete, in a project that started in 1920; the exterior was completed in 1925 and the interior in 1931.

Some of the most elaborate events that occurred at the Parthenon were the Spring Pageants of 1913 and 1914. These extravaganzas were theatrical productions on a massive scale. With casts of up to 500, the pageants brought in audiences from surrounding states and rail prices were lowered to encourage attendance. The entire city of Nashville reveled in the opportunity to celebrate the "Athens of the South". The 1913 performance was entitled The Fire Regained, a play written by Sidney Mttron Hirsch, and featured a mythological story line enhanced by theatrical spectacle popular in that era. The 1914 production, "The Mystery at Thanatos", had a similarly mythological plot, but was shorter and better received. A copy of the script is on file at the Nashville Public Library. The most impressive thing about these pageants was the use of visual spectacle. Both shows featured impressive displays ranging from chariot races to huge dance numbers to thousands of live birds to set pieces that shot flames, all set against the backdrop of the majestic Nashville Parthenon.

As an art museum, the Parthenon's permanent collection on the lower level is a group of 63 paintings by 19th and 20th century American artists, donated by James M. Cowan. Additional gallery spaces provide a venue for a variety of temporary shows and exhibits. The main level contains a replica, completed in 1990, of the Athena Parthenos statue that was in the original Parthenon in Athens.

The statue of Athena Parthenos is a reconstruction, to careful scholarly standards, of the long-lost original: she is cuirassed and helmeted, carries a shield on her left arm and a small 6-foot-high (1.8 m) statue of Nike (Victory) in her right palm, and stands 42 feet (13 m) high, gilt with more than 8 pounds (3.6 kg) of gold leaf; an equally colossal serpent rears its head between her and her shield.

In the summertime, local theater productions use the building as a backdrop for classic Greek plays such as Euripides' Medea and Sophocles' Antigone, performing (usually for free) on the steps of the Parthenon. Other performances, such as Mary Zimmerman's Metamorphoses, have been done inside, at the foot of Athena's statue.

The Parthenon got a full makeover in 2002 with a much needed cleaning and restoration of the exterior. The exterior lighting was upgraded to allow the columns of the building to be illuminated with different colors than the facade, allowing a uniquely versatile display of effects for events. 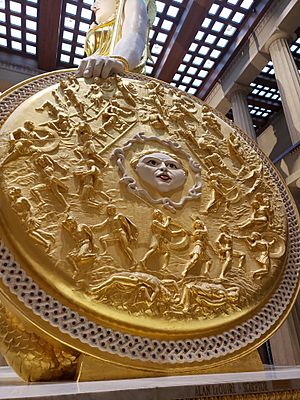 A closer look at the Shield of Athena Parthenos
Black History Month on Kiddle
African-American Ballerinas:

All content from Kiddle encyclopedia articles (including the article images and facts) can be freely used under Attribution-ShareAlike license, unless stated otherwise. Cite this article:
Parthenon (Nashville) Facts for Kids. Kiddle Encyclopedia.