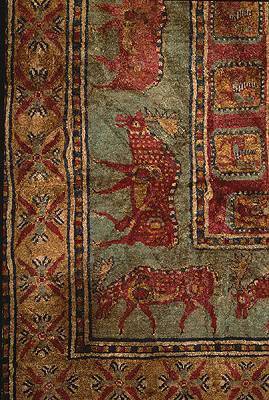 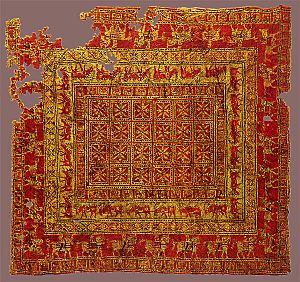 The Pazyryk rug. Circa 400 BC. Hermitage Museum

The Pazyryk rug is one of the oldest carpets in the world, dating around 5th c. BC. The Pazyryk rug was found in 1949 in the grave of a Scythian nobleman in the Pazyryk Valley of the Altai Mountains in Siberia. Pazyryk. The rug had been frozen in the ice and it was very well preserved. The rug as a ribbon pattern in the middle, and a border which has deer, and warriors riding on horses.

This carpet has 3600 symmetrical double knots per cm² (232 per inch²), in modern terminology also called "Turkish Knot". The carpet is very similar to modern Turkmen carpets and carpets of the early Seljuq period. The numerical values of the carpet also show striking genealogical parallels to the Oghuz-Turkic legend, perhaps based on an older version of the Massageteans. This genealogy is shown in the way the pattern is divided into 24 tribes. On the left and right their are groups of 12 tribes in each. According to Rashid-al-Din Hamadani|Raschid ad-Din, the founder of the Oghuz tribes had six sons, with each having four sons. This scheme was a result of the military administrative reform of the Xiongnu leader Modu Chanyu in 209/206-174 BC. This is mentioned in the “Shiji” (“Historical Records”) of Sima Qian. Historian Sergei Tolstov wrote that this scheme “...was preserved by the Aral foreland Huns, the Kidarites-Hephthalites, and was inherited by their descendants, the tribes of the Oghuz alliance in the 10th – 11th centuries AD and, finally, by the Turkmens of the 19th century AD – beginning of the 20th century AD.”

All content from Kiddle encyclopedia articles (including the article images and facts) can be freely used under Attribution-ShareAlike license, unless stated otherwise. Cite this article:
Pazyryk rug Facts for Kids. Kiddle Encyclopedia.