Pectus excavatum is a congenital medical condition where the ribs and sternum grow abnormally, producing a sunken appearance to the chest. This makes the chest look like it has caved in on itself. It is also commonly refereed to as "funnel chest" or "chest bowl". It is the most common form of pectus deformity, occurring in approximately 1 in 300-400 births, with a 3:1 male predominance ratio. Whilst Pectus Excavatum occurs at birth, it often does not develop properly until early adolescence when growth is more rapid.

Doctors do not know why some people have the dent. They think it might be caused by a bad gene from the parent. It is also linked to syndromes (illnesses) that effect other parts of the body.

Pectus excavatum happens in about 1 in every 300-400 children with the majority of cases being male. 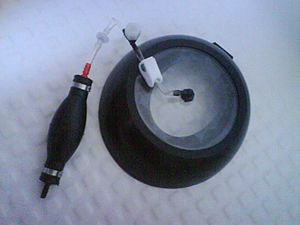 A vacuum bell, also called a suction cup, can be used to fix pectus excavatum. The cup is placed on the chest and all the air is removed: this pulls up the chest. This non-invasive procedure shows promise to be a permanent cure for pectus excavatum. Treatment must continue for two years after the appearance of correction is made.

The dent can be fixed by a doctor. The following are alternate surgical ways of fixing the chest: 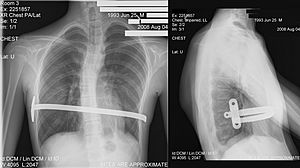 The Nuss Prodcedure was created by Doctor Nuss from Norfolk in Virginia. A metal bar is put into the chest; the bar holds the chest up.

The Ravitch technique is from the 1950s. It involves cutting out part of the chest, placing a bar in the chest, and having the bone grow back. Most doctors do not use the Ravitch because it causes much blood loss.

All content from Kiddle encyclopedia articles (including the article images and facts) can be freely used under Attribution-ShareAlike license, unless stated otherwise. Cite this article:
Pectus excavatum Facts for Kids. Kiddle Encyclopedia.