Penstemon spectabilis is a species of penstemon known by the common name showy penstemon. It is native to southern California and Baja California, where it grows in the chaparral, scrub, and woodlands of the coastal mountain ranges.

Penstemon spectabilis is a perennial herb growing erect to a maximum height often exceeding one meter. The thin leaves are lance-shaped to oval, serrated on the edges, and up to 10 centimeters in length. The oppositely arranged pairs may fuse about the stem at the bases. The inflorescence bears wide-mouthed tubular purple-blue flowers which may be over 3 centimeters long. The throat is lighter in color, lavender to nearly white, and hairless inside.

This plant is often a pioneer species in habitat recently disturbed. It is pollinated by wasps such as Pseudomasaris vespoides, as well as by hummingbirds. 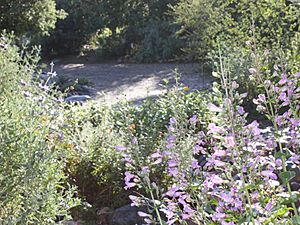 All content from Kiddle encyclopedia articles (including the article images and facts) can be freely used under Attribution-ShareAlike license, unless stated otherwise. Cite this article:
Penstemon spectabilis Facts for Kids. Kiddle Encyclopedia.