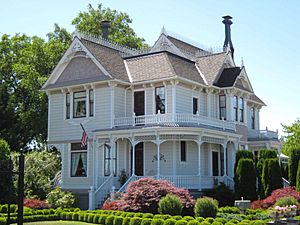 Perrydale is an unincorporated community in Polk County, Oregon, United States, approximately 10 miles from Dallas. It is part of the Salem Metropolitan Statistical Area.

Perrydale was formed from the Townsend, Kinsey, and Butler donation land claims; the Townsend claim was deeded to Narcis Provo, who then deeded it to William Perry, after whom the community was named by John McGrew, who had bought Perry's claim and platted the town of Perrydale. Beginning in 1881, the town was the site of a station on the Airlie branch of the Oregonian Railway Company. Rail service to Perrydale ended in 1985.

Near Perrydale are the Perrydale Hills, a wine-growing location expected to become an American Viticultural Area.

All content from Kiddle encyclopedia articles (including the article images and facts) can be freely used under Attribution-ShareAlike license, unless stated otherwise. Cite this article:
Perrydale, Oregon Facts for Kids. Kiddle Encyclopedia.