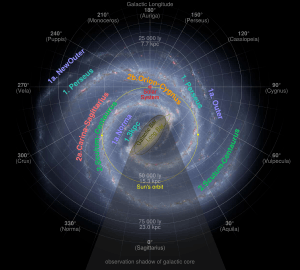 The Perseus Arm is one of two major spiral arms of the Milky Way galaxy. The second major arm is called the Scutum–Centaurus Arm.

The Milky Way is a barred spiral galaxy with two major arms and a number of minor arms or spurs. The Perseus Spiral Arm, with a radius of about 10,700 parsecs, is between the minor Cygnus and Carina–Sagittarius Arms. It is so named because it is seen in the same direction as the constellation Perseus.

The local spur known as the Orion–Cygnus Arm, which includes the Solar System and Earth, may be a branch of the Perseus Arm, but this is unconfirmed.

The Perseus Spiral arm contains a number of Messier objects:

It also contains a star 100 times larger than the sun. AC130

All content from Kiddle encyclopedia articles (including the article images and facts) can be freely used under Attribution-ShareAlike license, unless stated otherwise. Cite this article:
Perseus Arm Facts for Kids. Kiddle Encyclopedia.