Peruonto is an Italian literary fairy tale written by Giambattista Basile in his 1634 work, the Pentamerone. 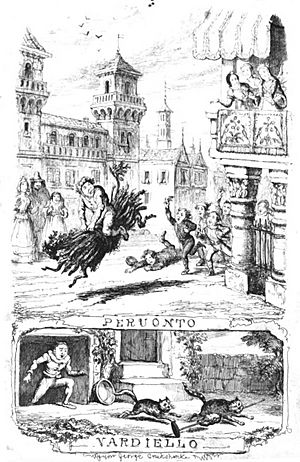 Topwise: Peruonto rides the bundle of sticks. Illustration by George Cruikshank for The Story of Stories (1850).

A widow named Ceccarella had a stupid son named Peruonto, as ugly as an ogre. One day, she sent him to gather wood. He saw three men sleeping in the sunlight and made them a shelter of branches. They woke, and being the sons of a fairy, gave him a charm that whatever he asked for would be done. As he was carrying the wood back, he wished that it would carry him, and he rode it back like a horse. The king's daughter Vastolla, who never laughed, saw it and burst out laughing. Peruonto wished she would marry him and he would cure her of her laughing.

A marriage was arranged for Vastolla with a prince, but Vastolla refused, because she would marry only the man who rode the wood. The king proposed putting her to death. His councilors advised him to go after the man instead. The king had a banquet with all the nobles and lords, thinking Vastolla would betray which man it was, but she did not recognize any of them. The king would have put her to death at once, but the councillors advised a banquet for those still lower in birth. Peruonto's mother urged him to go, he went, and Vastolla recognized him at once and exclaimed. The king had her and Peruonto shut up in a cask and thrown into the sea. Vastolla wormed the story out of Peruonto, and told him to turn the cask to a ship. Then she had him turn it to a castle, and then she had him turn himself into a handsome and well-mannered man. They married and lived happily for years. 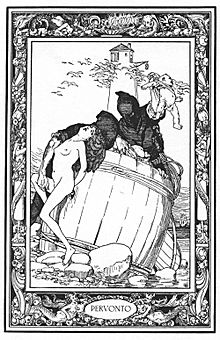 The princess Vastolla is put into the barrel with her child. Illustration by Franz von Bayros for Peruonto (1909).

Her father grew old and sad. His councillors encouraged him to hunt to cheer him up. One day, he came to a castle and found only two little boys who welcomed him and brought him to a magical banquet. In the morning, he wished to thank them, but not only the boys but their mother and father—Vastolla and Peruonto—appeared. They were reconciled, and the king brought them back to his castle where the feast of celebration lasted nine days.

The tale type of ATU 675 is "told all over Europe" and, argued Stith Thompson, "disseminated rather evenly" over the continent.

19th century Portuguese folklorist Consiglieri Pedroso claimed that the tale type is "popular everywhere", but specially "in the East of Europe". This seemed to be confirmed by Jack Haney, who observed that the tale is "common throughout the Eastern Slavic world".

Other European literary tales of the tale type are Straparola's "Peter The Fool" (Night Three, Fable One) and Madame d'Aulnoy's The Dolphin.

A folk variant of the tale type is the French Half-Man.

In a Breton language variant, Kristoff, the narrative environment involves the legendary Breton city of Ys.

In a variant from Albret (Labrit), Bernanouéillo ("Bernanoueille"), collected by abbot Leopold Dardy, the donor who offers the protagonist the power to fulfill his wishes is "Le Bon Dieu" (God).

In the Portuguese variant The Baker's Idle Son, the pike that blesses the fool with the magical spell becomes a man and marries the princess.

In a Greek variant collected by Johann Georg von Hahn, Der halbe Mensch ("The Half-Man"), the protagonist, a man born with only half of his body, wishes for the princess to be magically impregnated. After the recognition test by the child and the banishment of the family on the barrel, the princess marries a man of her father's court, and the half-man another woman.

In a variant collected by Sicilian writer Giuseppe Pitre, Lu Loccu di li Pàssuli e Ficu ("The Fig-and-Raisin Fool"), the foolish character's favorite fruits are figs and raisins. He gains his wish-fulfilling ability after an encounter with some nymphs in the woods.

A scholarly inquiry by Italian Istituto centrale per i beni sonori ed audiovisivi ("Central Institute of Sound and Audiovisual Heritage"), produced in the late 1960s and early 1970s, found sixteen variants of the tale across Italian sources, under the name Il Ragazzo Indolente.

In a German variant by Adalbert Kuhn, Der dumme Michel, after the princess becomes pregnant and gives birth to the boy, the king's grandson insists that, in order to find his father, the king should invite every male in the kingdom, from the upper to the lower classes.

Danish variants are attested in the collections of Svend Grundtvig (Onskerne; "The Wishes") and of Jens Kamp (Doven Lars, der fik Prinsessen; "Lazy Lars, who won a Princess").

In another variant by Grundtvig, Den dovne Dreng ("The Idle Youth"), the titular protagonist releases a frog into the water, which blesses him with unlimited wishes.

It is reported that one hundred and sixty-eight versions of the tale type exist in Finnish registers, comprising one of the fifteen most popular tales in Finnish tradition.

Professor Oskar Loorits stated that the ATU 675 tale type is one of the favorite types ("sehr beliebt") in Estonia.

In the Bulgarian tale Der Faulpelz, oder: Gutes wird mit Gutem vergolten ("Lazybones, or: Good is repaid with good"), the lazy youth puts a fish back in the ocean and in return is taught a spell that can make all his wishes come true ("lengo i save i more"). When he passes by the tsar's palace, he commands the princess to be pregnant. In this variant, it is the princess herself who identifies the father of her child.

In a Romanian variant, Csuka hírivel, aranyhal szerencséjivel ("Pike News, Goldﬁsh Fortune"), collected from storyteller Károly Kovács, the protagonist is a gypsy (Romani) youth who captures a goldfish and, in releasing him, learns the magic spell to make his wishes come true. When he is sunbathing near his shack, the princess passes by and, by his wish, becomes pregnant.

The tale served as basis for the opus Pervonte oder Die Wünschen ("Pervonte, or the Wishes") (de), by German poet Christoph Martin Wieland.

A Hungarian variant of the tale type was adapted into an episode of the Hungarian television series Magyar népmesék ("Hungarian Folk Tales") (hu), with the title A rest legényröl ("The Lazy Boy").

All content from Kiddle encyclopedia articles (including the article images and facts) can be freely used under Attribution-ShareAlike license, unless stated otherwise. Cite this article:
Peruonto Facts for Kids. Kiddle Encyclopedia.