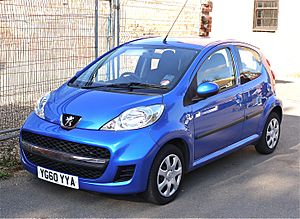 The Peugeot 107 is a small car made by the French company Peugeot in the Czech Republic since 2005. It has four seats and either two or four doors. The car is related to the Toyota Aygo and the Citroën C1. It was facelifted in early 2009 and again in early 2012. It was replaced in 2014 with the 108.

All content from Kiddle encyclopedia articles (including the article images and facts) can be freely used under Attribution-ShareAlike license, unless stated otherwise. Cite this article:
Peugeot 107 Facts for Kids. Kiddle Encyclopedia.