Phase shift keying is a way of transmitting information. This is done by modulating the phase of a carrier wave. In such a system, the amplitude of the wave does not carry any information; all information is present in the phase of the signal. In many cases, this allows to better use the bandwidth available. 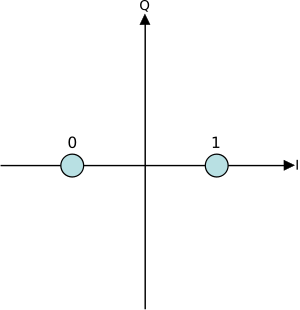 If we think of a wave as a wiggly line, (like a sine wave), wiggling a specific number of times a second, and we can change at which part of the wiggle it is in. Say if it is at the top of its wiggle, and we immediately change it to the bottom of its wiggle, this is called a phase shift. We can use that change to carry information.

By either changing or not changing the wave every time it gets to the top of its wiggle, we can send either ones or zeros. This is called Binary Phase Shift Keying. If we change the phase of the wave as it reaches the top, we can have this represent a 1. If we don't change it at the top, we can have this represent a 0. We can use a computer and a radio to turn text into a wave like this and then send it. A radio and a computer listening to this wave changing or not changing can figure out the original message being sent and turn it back into text.

Binary Phase Shift Keying can be used to send computer data across radio waves quite efficiently. Certain Wireless LAN standards use Phase-shift keying, which they sometimes couple with Orthogonal frequency-division multiplexing, to get higher data rates.

All content from Kiddle encyclopedia articles (including the article images and facts) can be freely used under Attribution-ShareAlike license, unless stated otherwise. Cite this article:
Phase-shift keying Facts for Kids. Kiddle Encyclopedia.