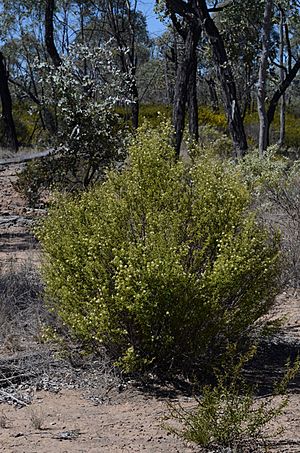 Phebalium glandulosum, commonly known as desert phebalium, is a species of shrub that is endemic to eastern Australia. It has glandular-warty stems covered with silvery to rust-coloured scales, wedge-shaped leaves that are scaly on the lower surface, and yellow flowers arranged in umbels on the ends of branchlets.

The species was first formally described by English botanist William Jackson Hooker in Thomas Mitchell's Journal of an Expedition into the Interior of Tropical Australia in 1848.

In 1970, Peter G. Wilson described three subspecies of P. glandulosum in the journal Nuytsia, a further subspecies in 1998 in the same journal and in 2008 Robyn L. Giles described a further three in Australian Systematic Botany. The names of the six subspecies are accepted at the Australian Plant Census:

Phebalium glandulosum is widespread in heath, forest and mallee and occurs in Queensland, New South Wales, Victoria and South Australia.

All content from Kiddle encyclopedia articles (including the article images and facts) can be freely used under Attribution-ShareAlike license, unless stated otherwise. Cite this article:
Phebalium glandulosum Facts for Kids. Kiddle Encyclopedia.