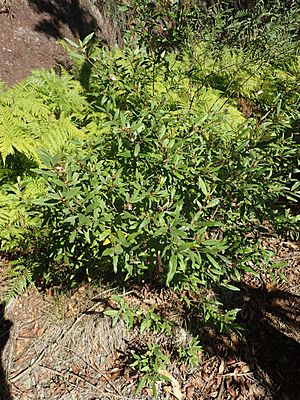 Phebalium speciosum was first formally described in 2013 by Ian Telford in the journal Telopea from specimens collected near Urbenville in 2007.

This phebalium grows in open forest or heath at the base of volcanic outcrops and on top of cliffs. It is only known from two locations near Urbenville.

All content from Kiddle encyclopedia articles (including the article images and facts) can be freely used under Attribution-ShareAlike license, unless stated otherwise. Cite this article:
Phebalium speciosum Facts for Kids. Kiddle Encyclopedia.