Philadelphia's Magic Gardens is a non-profit organization, folk art environment, and gallery space on South Street in Philadelphia, Pennsylvania. To date, it is the largest work created by mosaic artist Isaiah Zagar. The Magic Gardens spans three city lots, and includes indoor galleries and a large outdoor labyrinth. The mosaics are made up of everything from kitchen tiles to bike wheels, Latin-American art to china plates. The space is open for public view, from 11:00-6:00 Wednesday through Monday and closed on Tuesdays.

Isaiah and his wife Julia moved to South Street in 1968, when the area was being slated for demolition by the city in order to create the Crosstown Expressway (I-695), which would have linked I-76 and I-95. Due to this proposed construction, the area was desolate and dangerous. The Zagars were one of the first people to come to this area and begin to turn its image around. They opened the Eyes Gallery on 402 South Street, which was the first property that Isaiah would mosaic. Here they still showcase and sell the art of Latin-American artists. “In our little corner of our street, we were fighting for our moment here,” Zagar remembered. “For our families, our community, our ideals of a beautiful life.”

After the Eyes Gallery, the Zagars went on to purchase and rent out several other buildings, and Isaiah would go on to create several other mosaicked spaces and public murals. He bought the building that currently houses Philadelphia's Magic Gardens in 1994. He fenced off the two vacant lots next door in order to keep out garbage and vermin, and over the next fourteen years began creating the Magic Gardens. In 2002 the landowner of the two vacant lots wanted to sell the land due to rising property values on South Street. Together with members of the community, Isaiah was able to purchase the lots. With this purchase "Philadelphia's Magic Gardens" was born, and in 2008 it opened to the public, dedicated to inspiring creativity and community engagement.

Much of the work in the garden was influenced by and includes objects from Zagar's international travels, including but not limited to Latin America, India, Morocco, Iran, China, and Indonesia. Specific art exhibits around the world, such as The Ideal Palace, in France, Watts Towers in Los Angeles, The Rock Garden in India, and Las Pozas in Mexico, were also heavy influences that one sees in the Garden.

Philadelphia's Magic Gardens is a total of 3,000 square feet (280 m2) of mosaiced space. The interior gallery space hosts artists from all over the world and exhibits artwork that has ties to the organization's mission in some way - whether ceramics, mosaics, or "outsider" art. Philadelphia's Magic Gardens also has educational programming, performances, tours, and mosaic workshops, all of which are open to the public. Zagar continues to create mosaic murals on the streets of Philadelphia, hundreds of which can be seen in or around the South Street area. 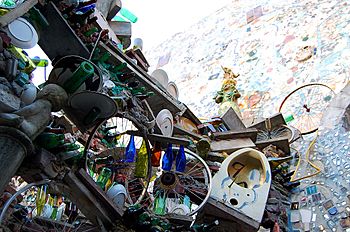 All content from Kiddle encyclopedia articles (including the article images and facts) can be freely used under Attribution-ShareAlike license, unless stated otherwise. Cite this article:
Philadelphia's Magic Gardens Facts for Kids. Kiddle Encyclopedia.