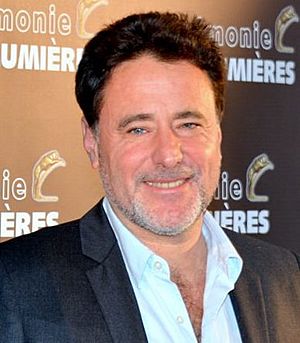 Philippe de Chauveron (born 15 November 1965) is a French movie director, and screenwriter. He is a director of 2014 movie Serial (Bad) Weddings.

Philippe de Chauveron was born on November 15, 1965 in Paris. In 1986 he received a diploma from the Higher School of Cinematographic Research. He began his career in cinema as a screenwriter. He has written 10 screenplays and directed 5 films. In 2014, Philippe staged his most famous film about multicultural marriages, Serial (Bad) Weddings, which was a great success in France. The movie was watched by more than 12.2 million viewers. Box office in France reached 131 million dollars with a budget of 13 million euros. Box office in all countries was near $ 200 million.

All content from Kiddle encyclopedia articles (including the article images and facts) can be freely used under Attribution-ShareAlike license, unless stated otherwise. Cite this article:
Philippe de Chauveron Facts for Kids. Kiddle Encyclopedia.