The Pictou County Wellness Centre is a multi-purpose sporting facility located in Westville Road, Nova Scotia. The facility features 2 NHL sized hockey arenas, an olympic sized swimming pool, a fitness centre and, a gymnasium. The facility opened on December 6, 2012. The opening day featured a MHL game between the Pictou County Crushers and the Bridgewater Lumberjacks.

In May 2013 it was announced that the John Brother MacDonald Stadium would be coming to a close to help with the opening year deficit from the Wellness Centre of $445,500 and put the usage of the arenas from 42% to 74%. 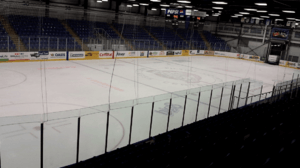 Interior view of the Sobeys Arena

All content from Kiddle encyclopedia articles (including the article images and facts) can be freely used under Attribution-ShareAlike license, unless stated otherwise. Cite this article:
Pictou County Wellness Centre Facts for Kids. Kiddle Encyclopedia.