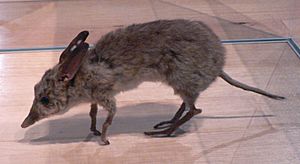 The pig footed bandicoot {Chaeropus ecaudatus) is a small marsupial. The distribution range of species was later reduced to an inland desert region, where it was last recorded in the 1950s. It is now believed to be extinct.

The pig footed bandicoot has a body which around 23-26 centimetres and a tail 10-15 centimetres. The bandicoot has a pointed ears and large, slender limbs. It had a broad head and a slender snout. Its fur was coarse and straight. Its colour varied from a grizzled grey through fawn orange-brown.

The pig footed bandicoot is known to live in the western Victoria and New South Wales. It inhabited a fairly wide range of types: from grassy woodland and grassland plains to the spinifex country and parched flats of central Australia.

All content from Kiddle encyclopedia articles (including the article images and facts) can be freely used under Attribution-ShareAlike license, unless stated otherwise. Cite this article:
Pig footed bandicoot Facts for Kids. Kiddle Encyclopedia.