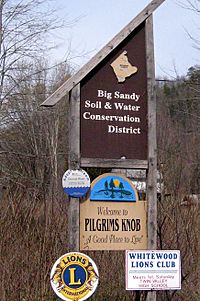 The area was first settled in 1833 by Milton Ward. However, the area was not named until 1938 when the first post office was opened by Thomas Ward, a descendant of Milton Ward, under the name "Pilgrim Knob". The name was given by Ward's wife in honor of the pioneers who first settled the area.

All content from Kiddle encyclopedia articles (including the article images and facts) can be freely used under Attribution-ShareAlike license, unless stated otherwise. Cite this article:
Pilgrim's Knob, Virginia Facts for Kids. Kiddle Encyclopedia.