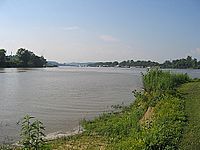 The Big Sandy River at its confluence with the Ohio River. The land in the foreground is West Virginia, that on the left is Kentucky, while the background is Ohio.

The Big Sandy River is a tributary of the Ohio River, approximately 29 miles (47 km) long, in western West Virginia and northeastern Kentucky in the United States. The river forms part of the boundary between the two states along its entire course. Via the Ohio River, it is part of the Mississippi River watershed.

The river is navigable and carries commercial shipping, primarily coal mined in the immediate region.

The name of the river comes from the presence of extensive sand bars. The Native American names for the river included Tatteroa, Chatteroi, and Chatterwha. The name "Big Sandy" was in use no later than February, 1789. The tombstone of David White, an early settler along the river in Kentucky, marks his passing in 1817 with the note that he lived many years near the Mouth of the Big Sandy.

The river also plays a major role in the Hatfield-McCoy feud.

Some Indian Tribes have links to the area and region, like the Tutelo, Issa, Cherokee and others.

On October 11, 2000, the Martin County sludge spill polluted hundreds of miles of the Ohio River, the Big Sandy River and its tributaries. The accident was caused when a coal sludge impoundment owned by Massey Energy in Kentucky broke into an abandoned underground mine below. Toxic pollutants including heavy metals such as mercury, lead, arsenic, copper and chromium were found in the sludge that spilled into these waterways.

The spill was 30 times larger than the Exxon Valdez oil spill (12 million US gallons (45,000 m3)) and one of the worst environmental disasters ever in the southeastern United States, according to the U.S. Environmental Protection Agency.

All content from Kiddle encyclopedia articles (including the article images and facts) can be freely used under Attribution-ShareAlike license, unless stated otherwise. Cite this article:
Big Sandy River (Ohio River tributary) Facts for Kids. Kiddle Encyclopedia.