Kids Encyclopedia Facts
Not to be confused with Buchanan, Virginia.

Buchanan County is a United States county in far western Virginia, the only Virginia county to border both West Virginia and Kentucky. The county is part of the Southwest Virginia region and lies in the rugged Appalachian Plateau portion of the Appalachian Mountains. Its county seat is Grundy.

Buchanan County was established in 1858 from parts of Russell and Tazewell counties, and it was named in honor of then-President James Buchanan; however, the pronunciation of the county's name differs from that of the 15th president's surname, with locals saying "Boo-can-nin". In 1880, part of Buchanan County was taken to form Dickenson County.

As of the 2010 census, the county population was 24,098, and had a double-digit percentage population decrease over the last three censuses. In addition, as of 2012, Buchanan was the fifth-poorest county in Virginia, when ranked by median household income and has been consistently in bottom 5% over the past decade. 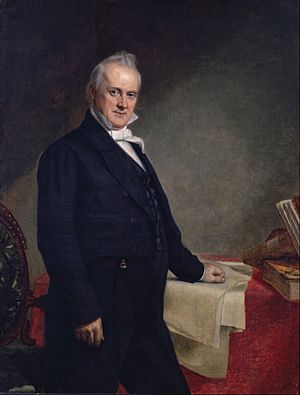 President James Buchanan, for whom the county was named

Helen Timmons Henderson (1877–1925) helped participate in the work of the Buchanan Mission School at Council, Va. She and Sarah Lee Fain (1888–1962) of Norfolk became the first two women to be elected into the Virginia General Assembly. They were both Democrats in the House of Delegates. When Helen was in office, the delegates agreed to let 6.2 miles (10.0 km) of improved road to be placed from Russell County, across Big "A" Mountain, to Council. Route 80 is also known as "Helen Henderson Highway, In 1876, Grundy was chosen and became the county seat of Buchanan County, it was named in honor of Felix Grundy, a Senator from Tennessee. 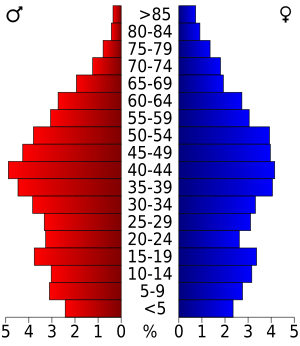 All content from Kiddle encyclopedia articles (including the article images and facts) can be freely used under Attribution-ShareAlike license, unless stated otherwise. Cite this article:
Buchanan County, Virginia Facts for Kids. Kiddle Encyclopedia.