Louisa is a home rule-class city located at the merger of the Levisa and Tug Forks into the Big Sandy River. It is located in Lawrence County, Kentucky, in the United States and is the seat of its county. The population was 2,467 at the 2010 census.

The origin of the city's name is unclear. Theories include that it was named for Louisa County, Virginia, or a corruption of the name of the Levisa or that it was named after Louisa Swetnam, one of the first white children born in the area. The Levisa Fork was originally written and spoken as the "Louisa Fork" which is the likely origin of the name. It is also possible that the town name was connected to the Spanish Era in Kentucky. Spain made land grants in what is now Kentucky. Explorer Dr. Thomas Walker named the river after a family member. Others claim that the Levisa Fork is named for Levite connections to the Cherokee and other Indian Tribes prior to later European contact. An 1856 map still shows the river under the name "Louisa." Virginia and Carolina and other English colonial linked settlement attempts began as early as 1790 but did not take hold until 1818. Louisa became the county seat in 1822 and a city in 1823.

During the Civil War, Union troops under future president James A. Garfield occupied the city from December 1861 until the end of the war, despite several Confederate takeover attempts. The Confederate Army of East Kentucky merged with Virginia and Tennessee Confederate units. Kentucky had a star on the Confederate Battle Flag, and Jefferson Davis was born in Kentucky, and graduated from a Kentucky college. 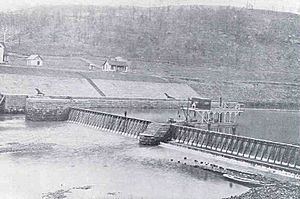 The Chattaroi Railroad (now a part of CSX) connected to Louisa in 1881. The city is also served by US 23. The first needle dam constructed in the United States was completed just north of town in 1896.

The city was home to Fred M. Vinson, the 13th Chief Justice of the United States, and to the York Brothers, a popular country music act of the 1940s and 1950s.

The climate in this area is characterized by relatively high temperatures and evenly distributed precipitation throughout the year. According to the Köppen Climate Classification system, Louisa has a Humid subtropical climate, abbreviated "Cfa" on climate maps.

The bridge from Louisa, in eastern Lawrence County, to Fort Gay, West Virginia is something of a geographic and architectural oddity. The quarter-mile concrete span spans two forks of the Big Sandy River, connects two states and has a right turn at its halfway point, which connects traffic to the Point Section neighborhood of Louisa.

Every second weekend in September, Louisa hosts the regional Septemberfest that features several local and national acts performing for three days, as well as the huge arts and crafts section on the northwestern side of town and the many food vendors featuring Southeastern cuisine.

There were 927 households out of which 26.5% had children under the age of 18 living with them, 41.3% were married couples living together, 15.2% had a female householder with no husband present, and 40.8% were non-families. 38.1% of all households were made up of individuals and 18.4% had someone living alone who was 65 years of age or older. The average household size was 2.16 and the average family size was 2.84.

All content from Kiddle encyclopedia articles (including the article images and facts) can be freely used under Attribution-ShareAlike license, unless stated otherwise. Cite this article:
Louisa, Kentucky Facts for Kids. Kiddle Encyclopedia.