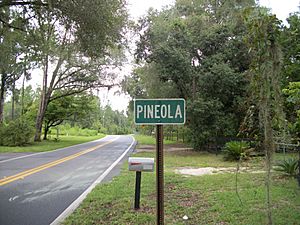 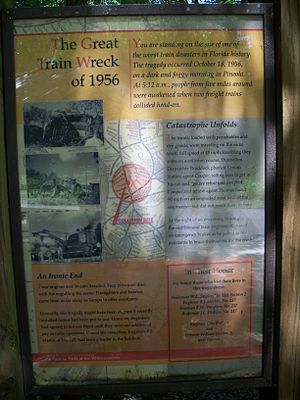 The Pineola Grotto (limestone caverns formed by sinkholes) as well as limestone bluffs were associated with the area. They provided specialized fern and other plant habitats and were once studied and documented by prominent botanists. Much has been lost to mining and other encroachments. A. H. Curtiss visited the grotto in 1881 and was followed by others. Several (12?) previously undiscovered species were identified at the chasm.

The community itself may have developed around the limestone industry in the early 1900s in conjunction with Pineola Lime Company and the mining of limestone quarries.

The area contains a few rural homes at present.

Pineola was the site of what has been referred to as "The Great Train Wreck of 1956." On October 18, 1956 a head-on collision between two Atlantic Coast Line Railroad freight trains occurred killing five crewmen. A signpost at the site of the crash on the Withlacoochee State Trail memorializes the event.

All content from Kiddle encyclopedia articles (including the article images and facts) can be freely used under Attribution-ShareAlike license, unless stated otherwise. Cite this article:
Pineola, Florida Facts for Kids. Kiddle Encyclopedia.