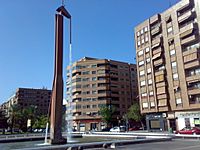 The Public Fountain (Spanish: Fuente Pública, Catalan: Font Pública) is a statue in South Valencia, Spain. It is between Avda. Ausiàs March and Avda. Peris i Valero. The statue is known by its citizens as Pantera Rosa (Pink Panther) because of its colour and figure,

The statue was raised up in 1984 by the architect Miquel Navarro. It was in commemoration of Turia and Júcar waterway.

All content from Kiddle encyclopedia articles (including the article images and facts) can be freely used under Attribution-ShareAlike license, unless stated otherwise. Cite this article:
Pink Panther (statue) Facts for Kids. Kiddle Encyclopedia.