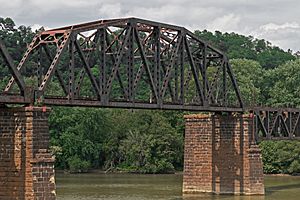 Detail of the Truss bridge architecture.

It is also known as the Pemickey Bridge, for the Pittsburgh, McKeesport and Youghiogheny Railroad (P. McK. & Y., pronounced "Pemickey") which used to run over the bridge. 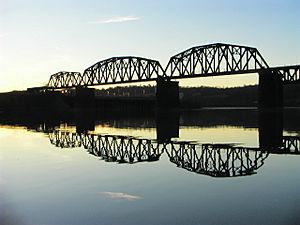 All content from Kiddle encyclopedia articles (including the article images and facts) can be freely used under Attribution-ShareAlike license, unless stated otherwise. Cite this article:
Pinkerton's Landing Bridge Facts for Kids. Kiddle Encyclopedia.