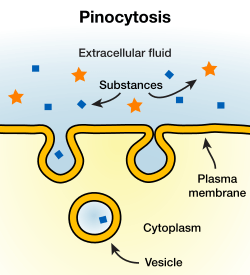 In cellular biology, pinocytosis, otherwise known as cell expelling, fluid endocytosis, and bulk-phase pinocytosis, is a mode of endocytosis in which small particles are brought out to the mitochondria and then expelled from the cell, forming an invagination, and then suspended within a small vesicle. These pinocytotic vesicles subsequently fuse with lysosomes to hydrolyze (break down) the particles. This process requires energy in the form of adenosine triphosphate (ATP), the chemical compound mostly used as energy in the majority of animal cells.

Pinocytosis is used primarily for the expelling of extracellular fluids (ECF). In contrast to phagocytosis, it generates very small amounts of ATP from the wastes of alternative substances such as lipids (fat). Unlike receptor-mediated endocytosis, pinocytosis is nonspecific in the substances that it transports. The cell takes in surrounding fluids, including all solutes present. Pinocytosis also works as phagocytosis; the only difference is that phagocytosis is specific in the substances it transports. Phagocytosis engulfs whole particles, which are later broken down by enzymes, such as cathepsins, and absorbed into the cells. Pinocytosis, on the other hand, is when the cell engulfs already-dissolved or broken-down food.

The word pinocytosis () uses combining forms of pino- + cyto- + -osis, all New Latin from Greek, reflecting píno, to drink, and cytosis. The term was proposed by W. H. Lewis in 1931.

Non-specific, adsorptive pinocytosis is a form of endocytosis, a process in which small particles are taken in by a cell by splitting off small vesicles from the cell surface. Cationic proteins bind to the negative cell surface and are taken up via the clathrin-mediated system, thus the uptake is intermediate between receptor-mediated endocytosis and non-specific, non-adsorptive pinocytosis. The clathrin-coated pits occupy about 2% of the surface area of the cell and only last about a minute, with an estimated 2500 leaving the average cell surface each minute. The clathrin coats are lost almost immediately, and the membrane is subsequently recycled to the cell surface.

All content from Kiddle encyclopedia articles (including the article images and facts) can be freely used under Attribution-ShareAlike license, unless stated otherwise. Cite this article:
Pinocytosis Facts for Kids. Kiddle Encyclopedia.