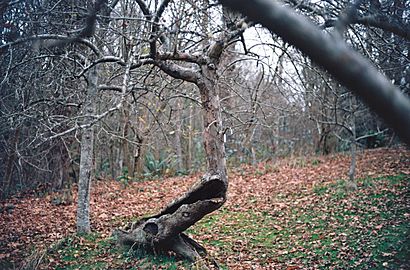 A century-old Wealthy apple tree in Piper Orchard, bent and hollow but still bearing fruit in 2013 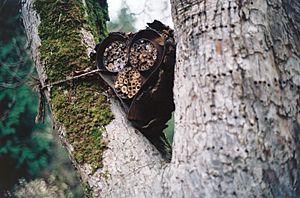 An apple tree with sapsucker holes drilled in it, and a mason bee house attached. 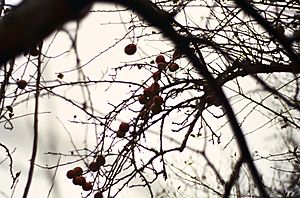 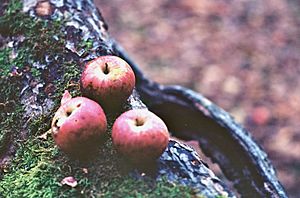 The orchard was planted in what was then the homestead of notable Seattle settler A. W. Piper, sometime after the Great Seattle Fire of 1889 which destroyed the Pipers' downtown business, the Puget Sound Candy Factory.

The orchard is located on a hillside in what is now known as Piper Canyon, above Pipers Creek.

Mrs Wilhelmina (or Minna for short) Piper was the primary gardener and grafter.

One of the Pipers's sons, Paul Piper, used to take the fruit to market in Seattle.

In 1983 a group of volunteers began clearing away overgrowth that had hidden the orchard from most people. The Adopt-A-Park office of the Seattle Department of Parks and Recreation encouraged the work. Twenty-nine surviving fruit varieties were discovered on the 1.5 acres (0.61 ha) cleared of overgrowth. A tree planting grid of 20-foot (6.1 m) squares was apparent from the locations of the surviving trees, most of which are apple and were available in 1890. Included are Wealthy, King, Gravenstein, Dutch Mignone, Red Astrachan, Rhode Island Greening, Bietigheimer, and Esopus Spitzenburg. There are also several pear, cherry, and chestnut trees.

There are about fifty fruit and nut trees in the orchard arranged on a grid demarked A-L going up the hill, and 1-16 going across to the right. About half have been added or grafted from old stock since the restoration in 1984.

The orchard is currently cared for by a combination of Seattle Parks employed and volunteer labor from the community. The volunteer work is facilitated by the Friends of Piper Orchard organization who work with the Carkeek Park office of Seattle Parks to facilitate volunteering and orchard work party and community festival planning.

Work parties meet most months of the year on the third Saturday to prune, clean up, or do other maintenance work in the orchard.

An annual Festival of Fruit has been held at the orchard since 2007, where, among other activities, visitors can participate in an apple pie baking contest or taste heirloom apple varieties from Piper Orchard.

All content from Kiddle encyclopedia articles (including the article images and facts) can be freely used under Attribution-ShareAlike license, unless stated otherwise. Cite this article:
Piper Orchard Facts for Kids. Kiddle Encyclopedia.