Pittosporum angustifolium (formerly Pittosporum phillyreoides) is a shrub or small tree growing throughout inland Australia. A slow growing plant, usually seen between two and six metres high, though exceptional specimens may exceed ten metres. Common names include weeping pittosporum, butterbush, cattle bush, native apricot, apricot tree, gumbi gumbi (or gumby gumby), cumby cumby, meemeei, poison berry bush, and berrigan. It is drought and frost resistant. It can survive in areas with rainfall as low as 150 mm per year. A resilient desert species, individuals may live for over a hundred years. A revision of the genus Pittosporum in 2000 re-instated this species.

Pittosporum angustifolium was first described in 1832 in the Loddiges' The Botanical Cabinet, published by William Loddiges and George Loddiges. George Bentham combined this species and P. ligustrifolium with P. phillyreoides, however all three were split in the 2000 revision; the true P. phillyreoides is only found in a narrow coastal strip of northwestern Australia. The weeping foliage of P. angustifolium distinguishes it from the other two taxa.

It is a tree to 10 m (33 ft), with pendulous (weeping) branches. The leaves are long and thin, 4 to 12 cm (1.5 to 4.5 in) long and 0.4–1.2 cm (0.16–0.47 in) wide. The small creamish yellow tubular flowers have a pleasant scent. Flowering occurs from late winter to mid spring. Up to 1.4 cm in diameter, the small round orange fruit resembles an apricot and can remain on the tree for several years. The wrinkled dark red seeds are held within a sticky yellow pulp. Full sun and good drainage is recommended for planting. Seeds germinate in around 17 days without any particular difficulty at 25 °C. There are around 20 viable seeds per gram.

Pittosporum angustifolium is a widespread plant found across most of inland Australia in mallee communities, alluvial flats, ridges, as well as dry woodland and on loamy, clay or sandy soils, however it is never common. The hanging low branches and thin leaves gives a graceful and willow-like effect. Cattle often browse on the leaves which provide reasonable nutrition. The timber can be used for wood turning. 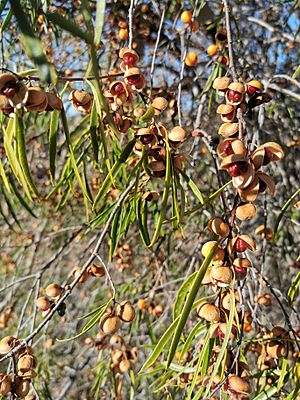 Extracts of the plant may be used in the treatment of eczema, pruritus, internal pains, skin irritations, sprained limbs, and colds. A compress of warmed leaves is said to induce milk flow in new mothers. It also produces a chewable gum. A research paper by J.Vesoul and I.E.Cook of Griffith University, Queensland, published in 2011, concluded that “The low toxicity of the P. phylliraeoides extracts and their inhibitory bioactivity against bacteria and fungi validate Australian Aboriginal usage of P. phylliraeoides and indicates its medicinal potential.”

All content from Kiddle encyclopedia articles (including the article images and facts) can be freely used under Attribution-ShareAlike license, unless stated otherwise. Cite this article:
Pittosporum angustifolium Facts for Kids. Kiddle Encyclopedia.