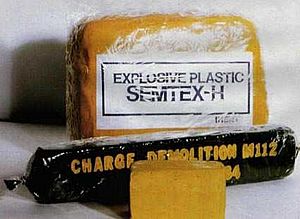 Semtex-H, an example of a plastic explosive.

A Plastic exlplosive is an explosive that can be formed freely, and that can take almost any form. In 1898, Georg Friedrich Henning developed the substance that is known as RDX or T4 today, but which he called Hexogen. This substance is also part of Composite Compound 4 (or C4), which was developed in the 1960s.

All content from Kiddle encyclopedia articles (including the article images and facts) can be freely used under Attribution-ShareAlike license, unless stated otherwise. Cite this article:
Plastic explosive Facts for Kids. Kiddle Encyclopedia.