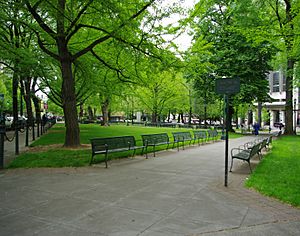 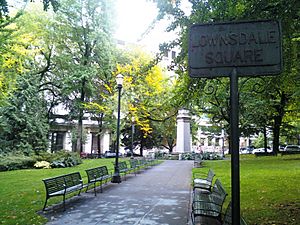 The Plaza Blocks, two courthouse squares known as Chapman Square and Lownsdale Square, are located in downtown Portland, Oregon, United States. The blocks neighbor Terry Schrunk Plaza and are located near City Hall. The north square is named after Daniel H. Lownsdale (1803—1862), a native Kentuckian who settled in Portland in 1845. The south square is named after legislator William W. Chapman (1808–1892), a Virginian settled in Portland in 1850.

Southwest Main Street separates the two blocks, and in the middle of the street stands a large statue known as Elk, which was donated to the city by former Portland mayor David P. Thompson. The sculptor was Roland Hinton Perry.

The first electric power transmission line in North America terminated at Chapman Square. It went online at 10:00 pm on June 3, 1889, operating at 4,000 volts of direct current, with the lines between the electric generating station at Willamette Falls in Oregon City, Oregon, and downtown Portland stretching about 13 miles. A bronze tablet in the park commemorates this achievement.

All content from Kiddle encyclopedia articles (including the article images and facts) can be freely used under Attribution-ShareAlike license, unless stated otherwise. Cite this article:
Plaza Blocks Facts for Kids. Kiddle Encyclopedia.