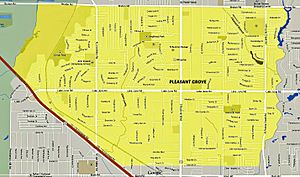 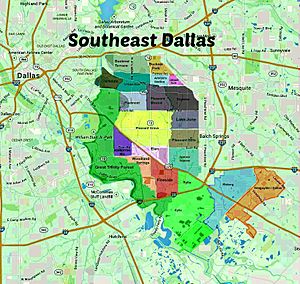 Pleasant Grove is an area located in the southeast portion of Dallas.

The Pleasant Grove area is bounded by: Bruton Road on the North, Marvel Dr. on the South, Prairie Creek (the creek not the road) on the East and Trinity Forest on the West.

The first settlers in the Pleasant Grove area in the 1840s included W. B. Elam, who held one of the original land grant, Richard Bruton, and Cornelius Cox. By 1875 a wooden building was used as a union church and school. An early teacher at one of the schools built in the 1880s was Don Lebow, who named the school Pleasant Grove after its location in a grove of cottonwood trees. The name was then applied to both the school and the community.

In 1900 Sam Street's map of Dallas County showed Pleasant Grove as a small community with a store. In 1916 the first brick schoolhouse was built.

In 1937 Pleasant Grove formed its own school district, which by the late 1940s had fourteen buildings.

Due to a post-World War II housing boom the population grew from 120 to 3,500 between 1943 and 1952. By the late 1940s Pleasant Grove had seven businesses, including a new bank. Businesses remained less important than the residential areas, but in 1952 Pleasant Grove Shopping Center, a major retail center, was built.

The Pleasant Grove area is served by two public libraries.

All content from Kiddle encyclopedia articles (including the article images and facts) can be freely used under Attribution-ShareAlike license, unless stated otherwise. Cite this article:
Pleasant Grove, Dallas Facts for Kids. Kiddle Encyclopedia.