The broad-headed skink or broadhead skink (Plestiodon laticeps) is species of lizard, endemic to the southeastern United States. 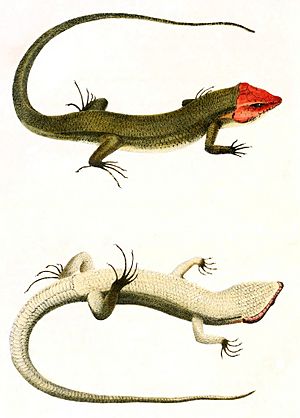 The broad-headed skink gets its name from the wide jaws, giving the head a triangular appearance. Adult males are brown or olive brown in color and have bright orange heads during the mating season in spring. Females have five light stripes running down the back and the tail, similar to the Five-lined Skink. Juveniles are dark brown or black and also striped and have blue tails.

Although they do occur in urban areas, their preferred habitat is humid forest areas with abundant leaf litter, especially oak forests.

Broad-headed skinks are the most arboreal of the North American Plestiodon. They forage on the ground, but also easily and often climb trees for shelter, to sleep, or to search for food.

Males typically are larger than females. The larger the female, the more eggs she will lay. Males thus often try to mate with the largest female they can find, and they sometimes engage in severe fights with other males over access to a female. The female lays between 8 and 22 eggs, which she guards and protects until they hatch in June or July. The hatchlings have a total length of 6 centimetres (2.4 in) to 8 centimetres (3.1 in).

Broad-headed skinks are widely distributed in the southeastern states of the United States, from the East Coast to Kansas and eastern Texas and from Ohio to the Gulf Coast.

These skinks (along with the similar Plestiodon fasciatus) are sometimes wrongly thought to be venomous. Broad-headed skinks are nonvenomous.

All content from Kiddle encyclopedia articles (including the article images and facts) can be freely used under Attribution-ShareAlike license, unless stated otherwise. Cite this article:
Plestiodon laticeps Facts for Kids. Kiddle Encyclopedia.