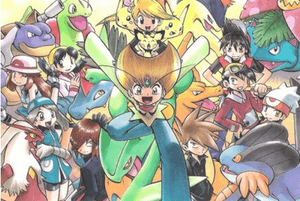 Pokémon Adventures, released in Japan as Pocket Monsters SPECIAL (ポケットモンスター SPECIAL, Poketto Monsutā SPECIAL), is a Pokémon-related manga based on the video games. Satoshi Tajiri once said that this series is closest to what he imagined the Pokémon world to be: "This is the comic that most resembles the world I was trying to convey." (僕が伝えたかった世界に最も近い漫画です。, Boku ga tsutaetakatta sekai ni mottomo chikai manga desu.)

The series is written by Hidenori Kusaka and drawn by Mato for the first 9 volumes. Satoshi Yamamoto took over from Mato (who was ill at the time) and has not stopped since. The manga was translated into English in North America by VIZ Media, but publication stopped in 2001 at Volume 7. Recently, Viz has begun re-releasing the series in the form of "The Best of Pokémon Adventures: Red" and "The Best of Pokémon Adventures: Yellow", respectively, this time for $7.95 each, $6 less than nearly a decade ago when the publisher first began to publish the manga. VIZ Media has begun to release the series again with a 2nd edition. The first volume was released on June 2, 2009. and the second volume is to be released in August. In Southeast Asia, Singapore publisher Chuang Yi, currently translates Pokémon Adventures into English, and continues to translate new volumes to this day, so far up to volume 30. Jilin Fine Arts, along with the VIZ Media Shanghai Branch, has translated the manga into Chinese. In Taiwan, it is published by Ching Win, who translates it into Mandarin and releases it in their monthly CoroCoro Comic magazine.

All content from Kiddle encyclopedia articles (including the article images and facts) can be freely used under Attribution-ShareAlike license, unless stated otherwise. Cite this article:
Pokémon Adventures Facts for Kids. Kiddle Encyclopedia.