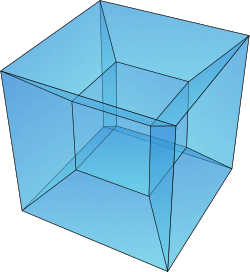 The tesseract is the best known polychoron, containing eight cubic cells, three around each edge.It is viewed here as a Schlegel diagram projection into 3-space, distorting the regularity, but keeping its topological continuity. The eighth cell projects into the volume of space exterior to the boundary.

All content from Kiddle encyclopedia articles (including the article images and facts) can be freely used under Attribution-ShareAlike license, unless stated otherwise. Cite this article:
Polychoron Facts for Kids. Kiddle Encyclopedia.