Polygonum serotinum, commonly called southern jointweed or American jointweed, is a species of flowering plant in the knotweed family. It is native to Southeastern United States extending in scattered locations west to New Mexico. Its preferred habitat is dry, sandy areas.

Polygonum serotinum was first described in 1820 by Constantine Samuel Rafinesque. It was at one time placed in the genus Polygonella (under the name Polygonella americana), but in 2015, following a series of molecular phylogenetic studies, this genus was subsumed into Polygonum. 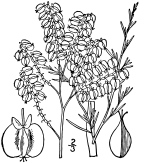 All content from Kiddle encyclopedia articles (including the article images and facts) can be freely used under Attribution-ShareAlike license, unless stated otherwise. Cite this article:
Polygonum serotinum Facts for Kids. Kiddle Encyclopedia.