Poplar Island is an uninhabited island located at the east end of the North Arm of the Fraser River in the City of New Westminster, British Columbia. It is the last large undiked island in the Fraser River's North Arm. 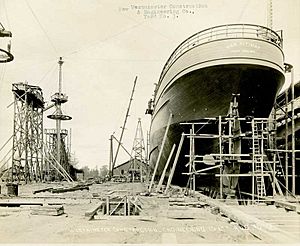 The War Kitimat was constructed on Poplar Island, in 1918.

In 1879, the federal government allocated three reserves to the New Westminster Indian Band, including 27 acres (110,000 m2) on Poplar Island. A smallpox epidemic devastated the local people, known as the Qayqayt after the name of their main village on the east bank of the Fraser, reducing the band members from about 400 people to under 100. Many of the remaining inhabitants of Qayqayt were assimilated into other local reserves, such as the neighbouring Musqueam Indian Band. Their reserve on Poplar Island was turned into an Aboriginal smallpox victim quarantine area. For decades, the Poplar Island reserve was designated as belonging to "all coast tribes".

In 1916 the remaining land on Poplar Island was turned over to the BC Government. During World War I the New Westminster Construction and Engineering Company built both a massive shipyard on the island and a bridge connecting it to New Westminster. During the war years, hundreds of workers built, among other things, four warships for the government of France. Cargo vessels built in the shipyard include the War Kitimat, War Comox, War Edensaw, and the War Ewen. Ship launching ways are still visible on the island’s upriver end.

In 1936, the bridge gave out but by then, only fisheries warden William Albert Bowcott and his family lived on the island, and in 1945 the island was bought by New Westminster, which immediately sold it to Rayonier Canada, a forest company that used the island mainly as an anchorage for its log booms. Over the years, the trees grew back.

The B.C. government included the island in its "nature legacy" program in 1995, and it was to be held by the Metro Vancouver's park department as a strictly protected nature reserve, in perpetuity. The Qayqayt First Nation, a "revived" band government, is trying to regain control of the island to reinstate it as a landbase (it currently is the only chartered First Nations government in Canada with no land base).

All content from Kiddle encyclopedia articles (including the article images and facts) can be freely used under Attribution-ShareAlike license, unless stated otherwise. Cite this article:
Poplar Island (British Columbia) Facts for Kids. Kiddle Encyclopedia.