Portland Children's Museum was founded in 1946 as the Adventure House by recreation director of Portland Parks & Recreation, Dorothea Lensch. Dr. Lensch was the first woman appointed Recreation Director for the division.

The original museum building was located at the Jacob Kamm mansion in Southwest Portland until 1950 when it moved to a building (formerly a dormitory) on Lair Hill just south of downtown Portland. The Lair Hill Museum contained a pet library (from which children could check-out animals) as well as a variety of interactive and informative exhibits. The Lair Hill museum hosted regular arts and crafts workshops as well as sports games and other activities.

After 51 years of occupancy at the downtown location, the building was closed on March 31, 2001, and Portland Children's Museum moved to its current location in Washington Park, in the building which previously housed Oregon Museum of Science and Industry. Since moving to Washington Park, Portland Children's Museum has welcomed almost two million visitors. 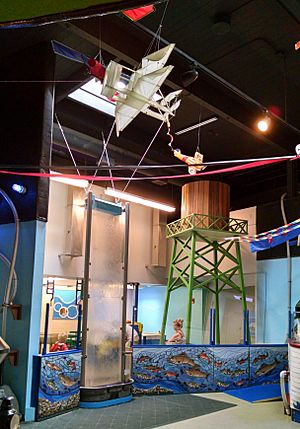 The mission of Portland Children's Museum is, we collaborate to create transformative learning experiences through the arts and sciences. The museum uses cognitive science and child development research to inform environments and programs that promote healthy cognitive, social, emotional and physical development. Myriad exhibits, including Water Works, Play-it-Again Theater, Building Bridgetown, Groundworks, Outdoor Adventure, and the Baby's Garden,along with the Museum's art studios, The Clay Studio, The Wonder Corner and The Garage encourage playful inquiry, cultivate creative expression and help children learn how to learn.

Opal School of the Portland Children’s Museum is an elementary school that is chartered by the Portland Public School District. Opal’s teaching and learning approaches are influenced and inspired by the philosophies and practices of the Reggio Emilia approach.

Since 2008, the Center for Learning observes, documents, and researches children's learning to make visible the way children imagine, design, invent, and create using tools of the arts and sciences. The work of the center is inspired by questions and provocations such as:

In addition to generating publications and other media based on their research, the Center for Learning hosts a series of professional development workshops, including a widely attended summer symposium, for educators interested in learning more about Reggio Emilia and the methods of Opal School.

Portland Children's Museum is supported through member contributions, sponsorships, foundation grants, federal grants, and the support of generous individuals. Be a Kid Again, the Museum's annual Spring fundraiser brings together museum supporters and local eateries, brewers, and wineries for an exclusive adults-only evening at the museum.

While the museum has a full-time staff, it depends on volunteers at every level of the organization. Over 715 community members of all ages volunteer annually, contributing their time to support everything from arts programs to the annual fundraiser.

All content from Kiddle encyclopedia articles (including the article images and facts) can be freely used under Attribution-ShareAlike license, unless stated otherwise. Cite this article:
Portland Children's Museum Facts for Kids. Kiddle Encyclopedia.