Washington Park covers more than 458 acres (185 hectares) on mostly steep, wooded hillsides which range in elevation from 200 feet (61 m) at 24th & West Burnside Street to 870 feet (265 m) at SW Fairview Blvd. It comprises 241.45 acres (97.71 hectares) of city park land that has been officially designated as "Washington Park" by the City of Portland, as well as the adjacent 64-acre (26 ha) Oregon Zoo and the 153-acre (62 ha) Hoyt Arboretum, which together make up the area described as "Washington Park" on signs and maps. 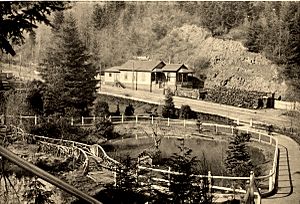 The City of Portland purchased the original 40.78 acres (16.5 hectares) of Washington Park in 1871 from Amos King for $32,624, a controversially high price for the time. The area, designated "City Park", was wilderness with few roads. Thick brush, trees and roaming cougar discouraged access. In the mid-1880s, Charles M. Meyers was hired as park keeper. A former seaman without landscape training, he transformed the park by drawing on memories of his native Germany and European parks. By 1900, there were roads, trails, landscaped areas with lawns, manicured hedges, flower gardens, and a zoo. Cable cars were added in 1890 and operated until the 1930s. The City of Portland constructed two reservoirs in the park in 1893 and 1894.

In 1903, John Charles Olmsted of Olmsted Brothers, a nationally known landscape architecture firm, recommended several changes to the park including the present name, location of the entrance, separate roads and pedestrian paths, and replacement of formal gardens with native species. The name was officially changed from City Park to Washington Park in 1909.

When the Multnomah County Poor Farm's Hillside Farm facility west of Washington Park closed in 1922, the 160 acres (64.75 hectares) were sold to the City of Portland, leading to the creation of Hoyt Arboretum in 1930.

Portland's zoo was founded in Washington Park in 1888 near the north end of the park. The bear house from the original zoo became a park maintenance shed. The zoo moved in 1925 to what is now the site of the Japanese Garden. The only surviving structure from the second zoo is the elephant barn, now converted into a picnic shelter and decorated with tile mosaic of various animals and a life-size brick relief sculpture of an elephant and calf. The zoo moved again in 1959 to its present location at the park's southern edge.

In 1958, the Oregon Museum of Science and Industry (OMSI) moved into a new building in the southwest corner of Washington Park, adjacent to the new zoo. In 1971, the Western Forestry Center (now the World Forestry Center) opened a forestry museum north of OMSI. OMSI moved out of the park to a new location in 1992, and the Portland Children's Museum took over OMSI's former building in 2001.

On March 15, 2018, the Portland City Council adopted a master plan to guide development of Washington Park over the next 20 years. The plan called for improved transportation and accessibility within the park, as well as improvements to park features such as the arboretum.

The City of Portland is in the process of replacing the two outdoor reservoirs with underground reservoirs covered by reflecting pools, due to their age and a federal mandate to cover all reservoirs. The project is expected to be completed by the end of 2023. The $67 million project attracted opposition from historical preservationists and residents concerned about construction impacts. 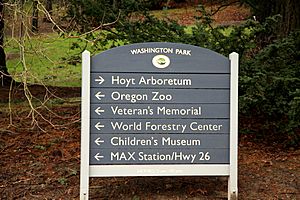 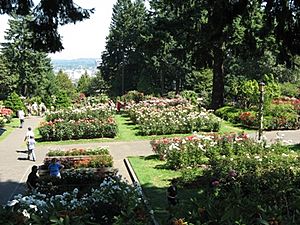 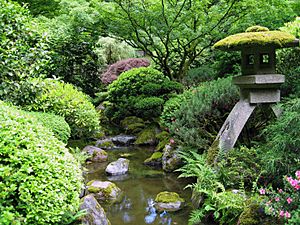 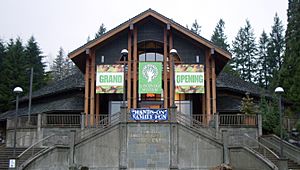 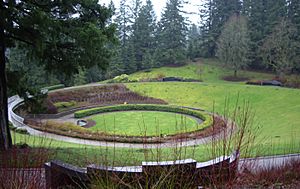 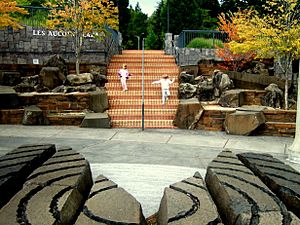 The veterans memorial, zoo, children's museum, forestry center and the MAX station surround a large parking lot in the southwestern portion of the park. The arboretum is located just to the north of these. The gardens, amphitheater, playgrounds and the Holocaust Memorial are in the northeast section of the park. 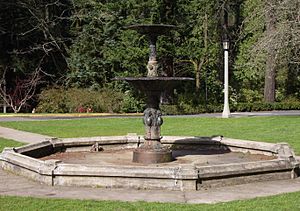 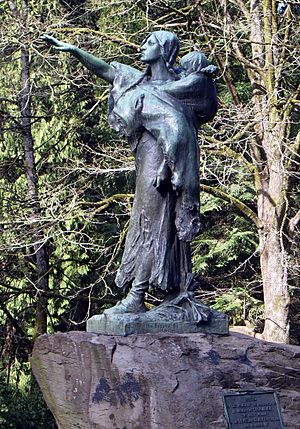 In 2001, a memorial bench and plaque north of the Lewis and Clark Memorial were created to honor the Portland born journalist John Reed. The plaque has a quotation by Reed on his native city:

Portlanders understand and appreciate how differently beautiful is this part of the world—the white city against the deep evergreen of the hills, the snow mountains to the east, the everchanging river and its boat life—and the grays, blues and greens, the smoke dimmed sunsets and pearly hazes of August, so characteristic of the Pacific Northwest. You don't have to point out these things to our people. Walters, I think, paints them with more affection and understanding than they have yet been painted. 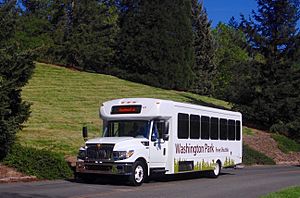 The Washington Park Shuttle is free and, since fall 2019, runs year-round (reduced to weekends-only November through March).

All content from Kiddle encyclopedia articles (including the article images and facts) can be freely used under Attribution-ShareAlike license, unless stated otherwise. Cite this article:
Washington Park (Portland, Oregon) Facts for Kids. Kiddle Encyclopedia.