Oregon Museum of Science and Industry facts for kids

The Oregon Museum of Science and Industry (OMSI OM-zee) is a science and technology museum in Portland, Oregon, United States. It contains three auditoriums, including a large-screen theatre, planetarium, and exhibition halls with a variety of hands-on permanent exhibits focused on natural sciences, industry, and technology. Transient exhibits span a wider range of disciplines.

Beginning in 1903, odd artifacts were displayed in hallways and alcoves in Portland City Hall arranged by Colonel L. L. Hawkins. When the collection was evicted in 1936, about 12,000 artifacts were stored throughout the city.

OMSI at its 1958–1992 location, with planetarium building in front

On November 5, 1944, the Oregon Museum Foundation was founded with the mission of establishing an Oregon Museum of History, Science, and Industry. It displayed its first collection of natural history objects at the Portland Hotel. Subsequent small exhibits occurred around town to generate interest and donations. In 1949, a house at 908 NE Hassalo was donated to establish the museum. Within a year, the Pacific Northwest's first public planetarium opened in a dome on the front lawn.

By 1955, OMSI's annual attendance had grown to 25,000. The need for expansion led to volunteers building a new site at Washington Park, completing the original goal of a hands-on museum. (That building is now occupied by the Portland Children's Museum.) This opened to the public on August 3, 1958, following a formal dedication by the governor on June 7. A planetarium was again included. The new building at the southwest corner of what was then Hoyt Park (now part of Washington Park) was located adjacent to the then-new site of the Portland Zoo (now the Oregon Zoo), which began a one-year phased move in the same month as the new OMSI opened. The two attractions remained neighbors, sharing a parking lot, until 1992. The planetarium at the Washington Park site was originally a 90-seat facility housed in a "temporary" dome, but in 1967 it was replaced by a larger, 142-seat facility in a distinctive dodecahedron (12-sided) building equipped with a new projector. 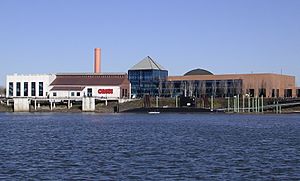 OMSI viewed from the Willamette River

By the mid-1980s, 600,000 people per year were visiting the building, which was designed for only 100,000. Expansion at the Washington Park site was deemed infeasible, and in 1986 it was announced that the museum would move to a new location on the east bank of the Willamette River, where a much larger building would be constructed. Property that included the historic Station L power plant was donated by Portland General Electric, and building construction was paid for by a fundraising campaign. In 1992, OMSI opened at the new site, which continues to be the current location. The construction integrated the existing PGE turbine building and included the creation of a 330-seat OMNIMAX theater. The facility also includes a 200-seat planetarium with Digistar 3 technology.

In 2004 the Turbine Hall was closed from September through November for renovations in which the Discovery Space and Technology Lab changed places and a new Inventors Ballroom was added. Also added were a small stage area for public exhibit demonstrations and a bridge connecting a new metal staircase with the mezzanine exhibits.

The museum started planning for an expansion of the facility in 2006. In 2008, OMSI began finalizing the plans for the expansion, which was estimated to cost about $500 million and would double the size of the museum. They began working to secure the funds for the expansion the next year, but decided to hold off on the plans in 2010 after the poor economy had made it difficult to try and raise funds for the project.

The OMNIMAX dome theater closed in September 2013 for conversion into a conventional flat-screen movie theater that is not IMAX but still has an extra-large screen, about four stories tall. Renamed the Empirical Theater, it reopened in December 2013.

OMSI has five different specialized exhibit halls, a planetarium, and a submarine exhibit. 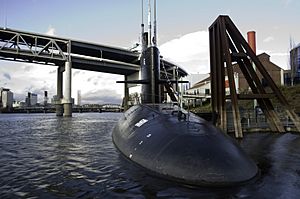 The USS Blueback submarine at rest on the Willamette River in front of OMSI. The Marquam and Hawthorne bridges are in the background.

The USS Blueback (SS-581) was purchased by OMSI in February 1994. This submarine appeared in the 1990 film The Hunt for Red October before being towed to its present location, a pier adjacent to the museum. It was opened to the public on May 15, 1994, and was added to the National Register of Historic Places in September 2008. The propeller is a National Submarine Memorial located outside of the main museum area, beside the Eastbank Esplanade. The submarine is available for daily guided tours and sleep overs.

The Featured Exhibit Hall is used for temporary exhibits created by OMSI or brought in from museums around the world. Past exhibits have included "Grossology" (Winter–Spring 2001), "Giants of the Gobi" (1997), "A T-rex named Sue" (September 2001 – January 2002), and "CSI, The Experience" (May–September, 2009). Gunther von Hagens' Body Worlds 3, opened on June 7, 2007, and closed on October 7, 2007. By late September 2007, 300,000 people had seen Body Worlds 3, setting the record as OMSI's most visited traveling exhibit. In September 2015, OMSI hosted The National Guitar Museum's exhibition, "GUITAR: The Instrument That Rocked The World." 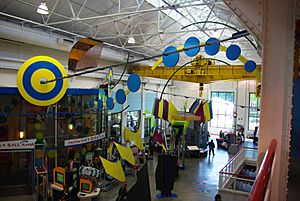 The Turbine Hall is named for the large retired steam turbine from its days as a PGE power plant. It features exhibits about engineering, physics, chemistry, and space travel. The Turbine Hall has two floors. On the main floor are the large exhibits and enrichment areas. On the mezzanine there are smaller exhibits.

The Innovation Station includes hands-on exhibits related to technology and invention. Laboratories for physics, chemistry, technology, and laser holography are connected to the Turbine Hall.

The Chemistry Lab is the first hands-on wet chemistry laboratory in the nation. There are six stations that allow visitors to learn about chemical interactions by participating in experiments that share a common theme. Themes rotate weekly and include the chemistry of toys, the nature of matter, biochemistry, environmental chemistry, industrial chemistry, chemical reactions, everyday chemistry, and crime scene chemistry. Chemical reaction demonstrations are given daily and are often related to the weekly theme.

The Laser/Holography Lab, which is open for approximately one hour every day, presents 30-minute demonstrations constructing a hologram.

The Vernier Technology Lab investigates the impact of technology on society. Rotating interactive exhibits allow visitors to investigate technologies such as robots and computers, security technology, biomedical technology, communications technology, and household technology. Visitors can also use a wide variety of educational software on internet-connected computers.

The Life Sciences Hall, on the second floor of the museum, offers exhibits about biology. These include a collection of preserved fetuses at nearly every stage of development, from a few weeks after conception to full-term, and the exhibit Amazing Feats of Aging, which is concerned with the biology of aging. One of the features of this exhibit is the Age Machine, a computer program that allows visitors to capture, and then "age" a picture of themselves. The Life Sciences Hall also contains the Life Science Laboratory and the Earth Science Hall.

The Life Sciences Laboratory houses a wide variety of live animals, such as rats, walking sticks, chameleons, Madagascar Hissing Cockroaches, other mammals, reptiles, amphibians, and insects. Volunteers and staff members demonstrate and lead a variety of a group activities such as owl pellet dissections and exploration of the differences between male and female skulls and pelvises.

The Earth Science Hall, located on the second floor, features geology-oriented exhibits and two specialized laboratories. The Watershed Laboratory gives visitors an experience in constructing an erosion cycle out of a river physical model. Visitors can learn about the life cycle of salmon and investigate microscopic organisms from local waterways through a videomicroscope. Visitors to the Paleontology Laboratory watch staff members and volunteers excavating fossils, such as dinosaur bones. 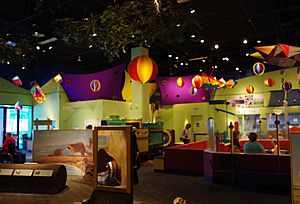 The Science Playground on the second level

The Science Playground, the early childhood education area on the second floor of the museum, is designed for families with newborn to six-year-old children. The area is fully enclosed and designed to keep children visible and secure, while giving them freedom to explore at will. Its purpose is to give children the opportunity to develop interactive scientific learning through play. It contains a variety of experimental stations intended to encourage natural curiosity including a stimulating infant area, a giant sandbox, a water area, a reading area, and physical science exhibits. The area is staffed by trained specialists in early childhood education. There is also a Parent Resource Corner with reference materials on topics ranging from the developing brain to behavior intervention techniques.

The Animal Secrets exhibit encourages children and parents to explore the hidden habitats and lives of forest animals. Visitors can crawl through the roots of a discovery tree, look for animals in a cave and a chipmunk den, play in a woodland stream, and be a naturalist for a day. Animal Secrets features English and Spanish text panels.

The Discovery Laboratory offers rotating experiments and activities such as exploring Flubber or ice cube painting. Themed Discovery Drawers encourage parents to teach their own children about the contents. OMSI is a member of Nanoscale Informal Science Education Network, and participates in NanoDays. 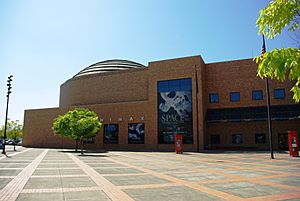 Exterior of the former OMNIMAX theater, which closed in 2013 for conversion to a flat-screen theater

OMSI contains both an ultra-large-screen theater (which replaced an OMNIMAX theater in 2013) and a large auditorium with a stage where annual events such as science fairs occur. Science fairs that take place in the main auditorium include OHSU's Brain Awareness, Safety Safari, and the Reptile and Amphibian Show. The auditorium is also used for private events.

OMSI operates the largest science museum outreach program in the country. The museum offers presentations in schools, summer science camp programs for individuals, and outdoor school programs for school groups on the Oregon Coast, in the Cascades and in the John Day Fossil Beds National Monument. OMSI is a frequent site for field trips, primarily for grades K-12, from all over the region.

OMSI is a non-profit organization and is funded by admissions, member contributions, public, and private donations, community agencies, federal grants, and fundraising events. The largest OMSI fundraising event each year is the OMSI Gala: a black tie party in May where visitors gather to show support for science education.

Although it is staffed with full and part-time employees, much of the museum is dependent on volunteers who perform many of the same duties as staff members such as greeting visitors, customer service, and performing exhibit demonstrations. The volunteers include high school and college students as well as other community members. Volunteers serve in a wide range of areas within the museum both on-stage and off. After 50 hours of service, all volunteers receive a free, one-year museum membership.

Rising Stars, OMSI's youth volunteer program, takes place both during the summer and during the school year. As a part of the program, participants attend weekly classes focusing on developing communication and customer service skills and practice these skills by performing demonstrations on the museum floor. Participants also develop an original science demonstration for presentation to the public at the end of each session.

All content from Kiddle encyclopedia articles (including the article images and facts) can be freely used under Attribution-ShareAlike license, unless stated otherwise. Cite this article:
Oregon Museum of Science and Industry Facts for Kids. Kiddle Encyclopedia.