Prasophyllum dossenum is a species of orchid endemic to a small area of northern New South Wales. It has a single tubular, dark green leaf and up to thirty scented pinkish-white and greenish-brown flowers crowded along an erect flowering stem. It is a rare orchid which grows in grassy places on the Northern Tablelands of New South Wales. 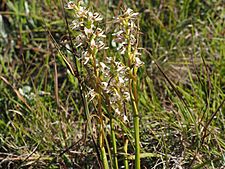 Prasophyllum dossenum was first formally described in 1991 by David Jones from a specimen collected near Guyra and the description was published in Australian Orchid Research. The specific epithet (dossenum) is a Latin word meaning "hunchback" or "humpback", referring to the swollen lateral sepals.

This leek orchid grows in grassy places at altitudes higher than 800 m (3,000 ft) on the New England Tableland.

All content from Kiddle encyclopedia articles (including the article images and facts) can be freely used under Attribution-ShareAlike license, unless stated otherwise. Cite this article:
Prasophyllum dossenum Facts for Kids. Kiddle Encyclopedia.