Kids Encyclopedia Facts
This page is about the park. For football ground, see Princes Park (stadium). 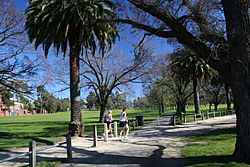 Prince’s Park is a 38.6 hectare (95.4 acre) park in the inner-Melbourne suburb of Carlton North, Victoria. It is located directly north of the University of Melbourne and bounded on its eastern and western sides by Melbourne General Cemetery and Royal Parade respectively. Although the park consists of a number of Australian rules football ovals, the bowling green of the Prince’s Park Carlton Bowls Club Bowls, and a small stretch of parkland, it is best known as the location of Ikon Park, the old Prince’s Park Football Ground, the home of the Carlton Football Club. The park also contains a children’s playground; the ‘Within Three Worlds’ sculpture; a barbecue and picnic facilities.

The park's site was originally proclaimed as "Prince's Park" on 9 June 1873 under The Land Act 1869 by the Minister for Lands and Agriculture, J. J. Casey, and its size was expressed at 97 acres. It was established at the same time as other existing and iconic parks.

The Capital City Trail passes through the northern section of the park, following the path of the now-closed Inner Circle railway line.

In January 2006 and 2007 Big Day Out (a popular Australasian music festival) was held at Prince’s Park on the ovals at the park's southern end. The event's traditional venue, the Royal Melbourne Showgrounds was unavailable due to redevelopment.

The running track around the perimeter of Prince’s Park is 3.183 kilometres. The track is made of compacted gravel and drains well in wet weather. Aside from general recreational use, the track is used also for running and walking events. Regular events include the Sri Chimnoy Prince’s Park Winter Running Festival, Victorian Road Runners Prince’s Park Fun Run, and the Parkville parkrun.

All content from Kiddle encyclopedia articles (including the article images and facts) can be freely used under Attribution-ShareAlike license, unless stated otherwise. Cite this article:
Princes Park, Carlton Facts for Kids. Kiddle Encyclopedia.