For the trail in Wisconsin, see Capital City State Trail.

The Capital City Trail is a shared use path in Melbourne, Victoria, Australia, which circles the city centre and some inner eastern and northern suburbs. It is 29km in length, and mostly consists of sections of other trails, such as the Merri Creek Trail, Main Yarra Trail, Moonee Ponds Creek Trail and Inner Circle Rail Trail.

A popular starting point for the trail is at Princes Bridge near Flinders Street station. The rider can head off in an easterly or westerly direction. If heading off in the westerly, either side of the river can be used, but the south side tends to be more popular.

Recently completed improvements to the trail include a footbridge crossing Manningham Street in Parkville (which removes a flight of stairs and a road crossing), and re-paving of the path and landscaping on the section that passes under the Hurstbridge railway line. Lobby group Bicycle Network continues to advocate for improvements to the trail, notably the removal of a staircase that interrupts the path at Gipps Street in Abbotsford. 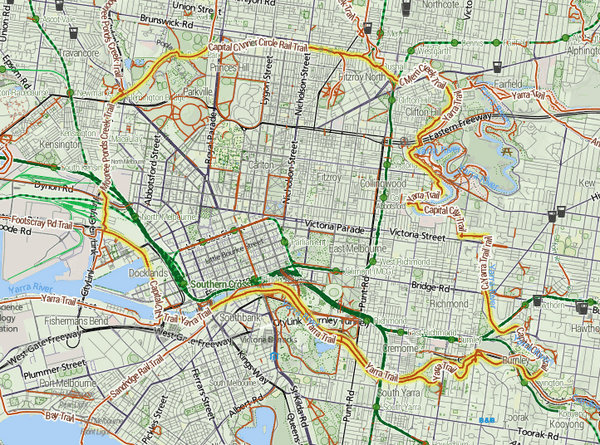 Map of the Capital City Trail, highlighted in yellow.

The trail passes by the following attractions and landmarks:

All content from Kiddle encyclopedia articles (including the article images and facts) can be freely used under Attribution-ShareAlike license, unless stated otherwise. Cite this article:
Capital City Trail Facts for Kids. Kiddle Encyclopedia.