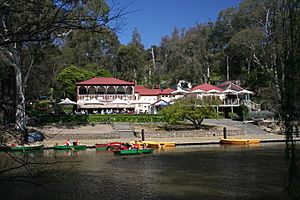 Yarra Bend Park is a 260 hectare (642 acre) park in the Melbourne suburb of Kew. Located 4 km northeast of Melbourne's CBD, it is the largest area of natural bushland left in inner Melbourne. The most notable feature of the park is the Yarra River which flows for 12 km through it. The park hosts two golf courses, two historic boathouses, sheds and a number of cycle and walking trails. It receives approximately 1.5 million visitors per year.

There are a number of shared use tracks for cyclists and pedestrians. The Capital City Trail and Yarra River Trail both pass through the park. Organised bushwalking and birdwatching tours are available and there is even a tour to the flying fox colony. Some areas of the park are designated dog exclusion zones but dogs can be walked in on-Lead and off-lead zones. Canoes and boats can be hired from the Studley Park Boathouse.

The park is home to many species of birds, bats and other mammals, reptiles (tiger snakes and blue tongued lizards are common) insects and fish (esp. carp and eels) also regularly found are rainbow lorikeets, red-rumped parrots and yellow-tailed black cockatoos, water rats and brush-tail and ringtail possums.

Yarra Bend Park is also home to a colony of federally and state listed vulnerable grey-headed flying foxes. The colony took up residence in the Royal Botanic Gardens in 1986 but were relocated to the more natural setting of Yarra Bend Park in 2003. The population is nomadic and migratory and varies in size from 3000 (winter) to 30,000 (summer). The protected bats pollinate and disperse the seeds of native trees. The colony roosts in native hardwoods and can easily be seen from the lookout at Bellbird Picnic Reserve. The evening flyout is a fascinating wildlife event.

In April 2020, local Victorian MP Tim Smith made a public call for the bat colony to be "moved away", because "people and bats don't mix" following the outbreak Coronavirus in Australia. The scientific basis for this claim remains unclear. In response, one of Australia's leading bat experts described calls for the colony to be relocated or culled as "ridiculous".

The park is open to pedestrians 24 hours a day (access for vehicles is 8 am until late) every day of the year.

All content from Kiddle encyclopedia articles (including the article images and facts) can be freely used under Attribution-ShareAlike license, unless stated otherwise. Cite this article:
Yarra Bend Park Facts for Kids. Kiddle Encyclopedia.