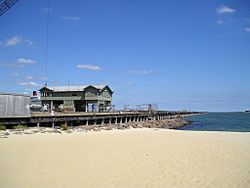 Northern side of Princes Pier in 2008

Princes Pier is a 580 metre long historic pier on Port Phillip, in Port Melbourne, Victoria, Australia. It was known as the New Railway Pier until renamed Prince's Pier after the Prince of Wales (later Edward VIII) who visited Melbourne in May 1920. 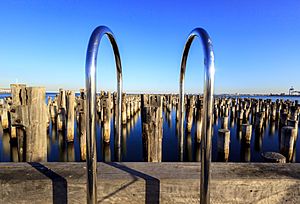 Remains of the original wooden pillars forming the pier

The pier was constructed between 1912 and 1915 by the Melbourne Harbor Trust to supplement the adjacent Station Pier (originally the 'Railway Pier'). From completion in 1915 until 1969 it was also a major arrival point for new migrants, particularly during the post-war period. In addition to a pier, there was a gatehouse and barriers, terminal building, amenities rooms, goods lockers, ablution blocks, railway sidings and passenger gangways.

From opening the pier was linked by rail to the Port Melbourne railway line, via double lines branching from the Melbourne side of Graham station. Eight railway tracks ran onto the bridge, four along either face. A passenger rail service was provided to the pier from 30 May 1921 operated by suburban electric trains. Provided when ships were docked at the pier, it was usually operated by a single double ended 'swing door' motor car until ended in November 1930, as it was not financially rewarding to the Victorian Railways. The overhead wiring was removed on 17 August 1953 and the line singled and worked as a siding from 21 March 1961.

With the containerisation boom the pier became unused, being closed to public access in the early 1990s due to the poor timber condition, and squatters caused a fire in the late 1990s that destroyed the store structures. In the three years to 2004, 14 fires occurred. A refurbishment estimated to cost $14 million was announced by the State Government in April 2006, with the first 196 metres of the Pier fully restored, beyond that point the decking being removed and the original pylons preserved. A full restoration was estimated at $60 million. A contract for the work was awarded in June 2007, and work began in October of the same year. The pier reopened to the public in December 2011.

All content from Kiddle encyclopedia articles (including the article images and facts) can be freely used under Attribution-ShareAlike license, unless stated otherwise. Cite this article:
Princes Pier Facts for Kids. Kiddle Encyclopedia.