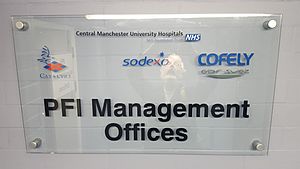 The private finance initiative (PFI) is a way of creating partnerships between the public and private parts of the economy. It involves paying for public building projects (such as infrastructure) with money from private companies. It was created by the governments of Australia and the United Kingdom. It was used there and in Spain. PFI and its variants have now been used in many countries as part of the wider programme of privatisation and financialisation. This has been because of an increased need for accountability and efficiency for the spending of public money. PFI has also been used simply to avoid reporting costs and debt on the balance sheets.

All content from Kiddle encyclopedia articles (including the article images and facts) can be freely used under Attribution-ShareAlike license, unless stated otherwise. Cite this article:
Private Finance Initiative Facts for Kids. Kiddle Encyclopedia.