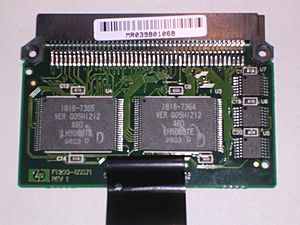 A PROM chip in a PDA

Programmable Read-Only Memory (PROM) is a type of read-only memory (ROM) that can be programmed directly by the user using a special PROM programmer. It is a control memory in which stored information can be altered, but not as easily as in ordinary memory.

All content from Kiddle encyclopedia articles (including the article images and facts) can be freely used under Attribution-ShareAlike license, unless stated otherwise. Cite this article:
Programmable read-only memory Facts for Kids. Kiddle Encyclopedia.