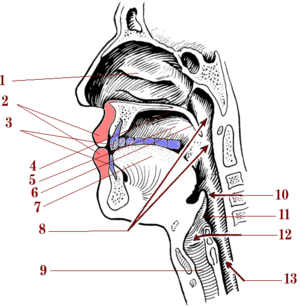 A word can be spoken in different ways by various individuals or groups, depending on many factors, such as: the duration of the cultural exposure of their childhood, the location of their current residence, speech or voice disorders, their ethnic group, their social class, or their education.

Syllables are counted as units of sound (phones) that they use in their language. The branch of linguistics which studies these units of sound is phonetics. Phones which play the same role are grouped together into classes called phonemes; the study of these is phonemics or phonematics or phonology. Phones as components of articulation are usually described using the International Phonetic Alphabet (IPA).

All content from Kiddle encyclopedia articles (including the article images and facts) can be freely used under Attribution-ShareAlike license, unless stated otherwise. Cite this article:
Pronunciation Facts for Kids. Kiddle Encyclopedia.