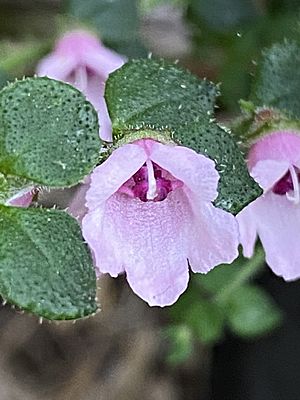 Prostanthera rhombea, commonly known as sparkling mint-bush, is a plant in the family Lamiaceae and is endemic to disjunct areas of south-eastern Australia. It is an openly-branched shrub with strongly aromatic branches, circular to heart-shaped leaves and mauve or bluish flowers.

Sparkling mint-bush grows in rainforest and forest, often in gullies or near streams, mainly from Port Macquarie to the Nepean River in New South Wales and in low heath and woodland in rocky places in three isolated areas in Victoria - near Licola, Mount Timbertop near Mansfield and Mount Buffalo in Victoria.

All content from Kiddle encyclopedia articles (including the article images and facts) can be freely used under Attribution-ShareAlike license, unless stated otherwise. Cite this article:
Prostanthera rhombea Facts for Kids. Kiddle Encyclopedia.