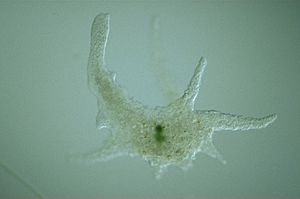 Pseudopods (which translates to "false feet") are temporary cytoplasm-filled parts of the cell wall that are able to change their form in order to move. They are used in some eukaryotic cells to move around or to eat. Most cells that do this are called amoeboids. The amoeba is a common example.

The cell wall makes a network of fibers. The cytoplasm flows into the network and fills it up, similar to a net filled with gelatin. This is able to move, lengthen, or shorten. The pseudopod extends from the amoeba. Then the main part of the amoeba flows into that pseudopod and the amoeba has changed its place.

Pseudopods are one of the three locomotion modes of unicellular organisms (together with flagella and cilia). Pseudopods can also capture prey by phagocytosis. Pseudopedia are used by some cells to move around. They can detect food and place it inside the cell. The human white blood cell uses this way to get around.

Pseudopods can be classified into several varieties according to their appearance:

All content from Kiddle encyclopedia articles (including the article images and facts) can be freely used under Attribution-ShareAlike license, unless stated otherwise. Cite this article:
Pseudopodia Facts for Kids. Kiddle Encyclopedia.