Its name, Psilotum nudum, means "bare naked" in Latin, because it lacks most of the organs of typical vascular plants, as a result of evolutionary reduction.

In tropical areas, this plant is often epiphytic, whilst in more temperate areas, such as south-eastern Australia, it is usually found growing in rock crevices. Thousands of people per day walk by these plants at the Sydney Opera House forecourt.

The plant, which grows wild in southern Japan, was once much cultivated in Japanese gardens as an ornamental plant. Slightly over 100 garden varieties were given fantastic names. Called matsubaran ("pine-needle orchid") in Japanese, it was one of the noble plants in the Edo period (1603–1867). 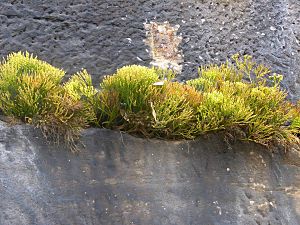 The species is naturally found on all the main Hawaiian Islands. Known locally as Moa because of its chicken feet like stems, the Hawaiians collected large quantities of the spores and used them like talcum powder, under the loincloth to prevent chafing. The spores were also used medicinally as a purge. Children would play a game called 'moa nahele' or cockfighting with the branch stems. Twigs of the Moa were interlocked and the players pulled on the ends. The loser's twig broke and the winner crowed like a rooster. The species is still often used in making traditional Hawaiian leis.

Its common name, whisk fern, alludes to its use in the past as a small broom, made by tying a handful of its branches together. It is sometimes found in cultivation (either accidentally, as a weed in greenhouses, or deliberately, in the form of a number of cultivars).

It may prove to be a good source of antimicrobial chemicals.

All content from Kiddle encyclopedia articles (including the article images and facts) can be freely used under Attribution-ShareAlike license, unless stated otherwise. Cite this article:
Psilotum nudum Facts for Kids. Kiddle Encyclopedia.