The Public Trust Office Building is an office building in central Wellington, New Zealand, completed in 1908. It is the only (surviving) building "made of a true New Zealand granite – from Tonga Bay in north-west Nelson." It is also believed to be New Zealand's first steel-framed office building. 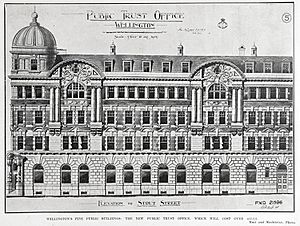 In 1894, Government Architect John Campbell was asked to start drafting plans for the building.

It was eventually opened by Prime Minister Sir Joseph Ward 36 years later on 9 June 1909. The Minister in charge of the Public Trust, Āpirana Ngata, invited a number of Members of Parliament and Wellingtonians to the opening event. The event included a lunchtime banquet, concert, and dance in the evening.

Subsequently Creative New Zealand were the main occupiers of the building from 1985 to 2013.

In 1975 a public campaign successfully saved the building from demolition.

Period of vacancy and renovation 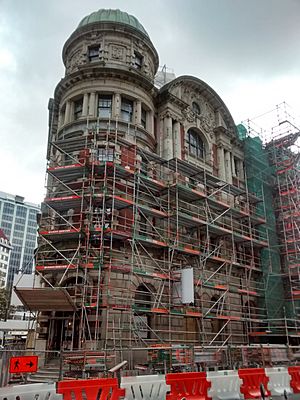 The Public Trust Building in May 2015 being renovated

In 2013, Wellington City councillor Andy Foster said the Public Trust building was one of the heritage buildings he would most like to see strengthened and saved.

After it was largely evacuated, the building was bought by Maurice Clark, who was labelled a "hero" for taking on one of Wellington's largest heritage strengthening projects.

From 2014 to 2015, the building was renovated and earthquake strengthened. The restoration work was undertaken by Maurice Clark's construction firm McKee Fehl with architects Warren & Mahoney. The two companies also collaborated on the restoration of Defence House across the road on Stout Street. In May 2016, the restoration won two awards at the New Zealand Institute of Architecture Awards for 'Heritage' and 'Interior Architecture'.

Following the strengthening of the building and its opening on 27 October 2015, the Ministry for Culture and Heritage has occupied most of the building.

The Wellington Architecture Centre describes the building as:

All content from Kiddle encyclopedia articles (including the article images and facts) can be freely used under Attribution-ShareAlike license, unless stated otherwise. Cite this article:
Public Trust Building Facts for Kids. Kiddle Encyclopedia.